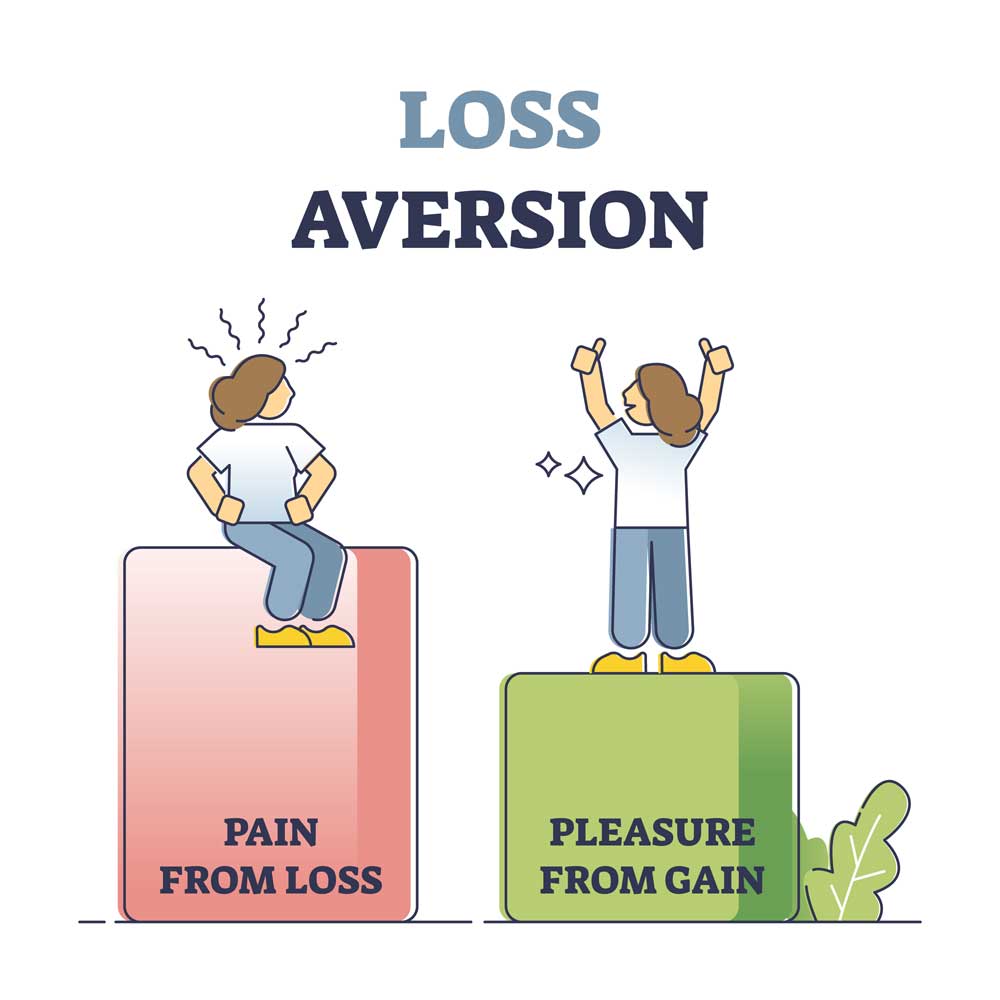 LOSS AVERSION: A BEHAVIORAL RISK FOR BOTH FINANCIAL ADVISORS AND THEIR CLIENTS

LOSS AVERSION: A BEHAVIORAL RISK FOR BOTH FINANCIAL ADVISORS AND THEIR CLIENTS

You win some and you lose some. For a moment think about how often you’ve heard or used that phrase. Maybe you said it to someone who was just denied a promotion. Or possibly someone said it to you after you lost a bet.  We usually hear and use it in the context of sporting events, business deals and investments.  Essentially, the phrase acknowledges the pain of a loss and reinforces the reality that we live in a world of uncertainty and risk. Indeed, sometimes we do win, and sometimes we do lose.

But beyond conceding the uncertainty of winning, the phrase raises an intriguing question.  Is the pain of losing comparable to the joy of winning? Is the pain of losing X equivalent to the pleasure of gaining X?  Economists and psychologists have answered that question and in so doing, identified loss aversion as a major decision-making phenomenon affecting both Investors and their advisors.  Kahneman (2011, pg. 300) calls the concept of loss aversion “…the most significant contribution of psychology to behavioral economics.”

The history of the loss aversion concept began with the influential and award-winning work of Kahneman and Tversky (1979). They presented several examples illustrating that we do not always act like economists thought we would/should; i.e., as purely rational, economic maximisers. We act differently when confronted with gains than when confronted with losses. We are risk averse when dealing with gains, but loss averse (basically, this means we are risk seekers!) when faced with losses.

Suppose instead, an individual is confronted with the same gamble, but expressed in terms of losses: opportunity A will result in a certain loss of $15,000 while opportunity B will result in either a loss of $10,000 or a loss of $20,000 based on a coin flip. It turns out that most individuals will choose B! They are called loss averse, but they are essentially risk seekers. When all outcomes are bad, individuals often become risk seekers.

Loss aversion manifests itself in many ways that affect financial decisions and hence, performance.

Loss averse investors don’t like to realize losses. As a result, they hold on to their losing investments too long, hoping to break even (Shefrin and Statman 1985). The tendency to hold on to losing stocks and sell winning stocks was called the “disposition effect” by Shefrin and Statman (1985). See also Odean (1998). But even worse, many loss averse investors actually take their losses at the worst time…. at market bottoms.

Loss averse investors may also jump on a bandwagon at its peak. If a stock or investment is rising in value and you didn’t invest in it, you may experience regret over the profits you could have had. Profits that you might have earned (had you invested) are a form of losses (foregone gains) for some investors. Rather than watching the potential investment continue to rise in value, a loss averse investor may buy it. This is a FOMO (fear of missing out) characteristic that investors should avoid. Often, loss averse investors who experience FOMO will invest at the peak of frothy speculation.

Because they don’t like losses, loss averse investors also invest too conservatively. After the Great Depression of the 1930’s, many Americans totally avoided the stock market. They became unwilling to take any risk of losing money and instead only invested in insured bank accounts, CD’s, and Treasuries. Dimmock and Kouwenberg (2010) found that loss-averse households have a lower probability of investing in the stock market, and if they do invest, they are more likely to use mutual funds than individual stocks.

Loss averse investors also consider sunk costs when making decisions: the time, energy, money and ego that they put into a decision. As a result, they hold on to a losing stock, not wanting to admit they were wrong. Incorporating a sunk cost into their decision creates a reference point for future decisions (“I’ll sell this losing investment when it gets back to the price that I paid for it.”).  Many loss averse investors also display this “anchoring bias”; they focus only on the price they paid for an asset when making subsequent trading.

Rather than sell their homes at a loss, loss averse home sellers will withdraw from the market entirely (see Genesove and Mayer (2001)).  Home sellers who have gains on their houses behave differently when selling than those who are losing on their houses. Sellers’ behavior is also consistent with anchoring; home sellers fixate on the original price they paid for their house.

Finally, loss aversion is often related to “regret aversion.” Investors initially like a stock they own, or else they never would have bought it. Selling it for a loss means that they must admit they made a mistake (regret). But selling it also opens the door to additional regret if they sell the stock and it subsequently turns around and rises. No one wants to sell at the bottom. Regret-averse investors may avoid risky assets simply because they fear the regret they’ll face if there is a bad outcome; they actually anticipate possible regret. Conversely, loss averse investors may take on more risk when confronted with a losing position. They will “roll the dice” in the hope they’ll win and recoup/reverse their losses. Coval and Shumway (2005) found that loss averse futures traders who experience morning losses take more risks during the afternoon.

Eighty-two percent of financial advisors agreed with this statement: “I tend to feel twice as bad about a loss as I feel good about an equivalent gain.” (Schwab and Cerulli (2019)). Because advisors are also likely to be investors themselves, and may also be loss averse, the investing behaviors and beliefs describing the loss adverse investor in the preceding section also apply to advisors. For example, loss averse financial advisors may not advise their clients to sell their losing securities, may invest too conservatively for their clients, and may communicate less frequently with clients in a down market than in an up market.

Beyond investor specific biases, an advisor’s loss aversion will also affect his/her professional relationship with clients, generally, and relationship with “difficult” clients specifically.  For example, a loss-averse advisor may not want to lose a client, and hang on too long to a client that should be let go.  Just as an investor may hold on to a losing stock too long, so too may an advisor hang on to a losing (i.e., difficult) client too long.

Clearly some clients require more “hand holding” than other clients, consuming a disproportionate amount of the advisor’s energy and time relative to other clients.  Also, some clients may ask an advisor to engage in questionable (legal and ethical) activities, or may have an abrasive personality, thus testing the advisor’s emotional intelligence (EQ) and tolerance for that abrasion.

Some advisors who don’t want to admit they made a mistake in taking on the client or are reluctant to lose fees generated by that client, may continue to pander to that client even though a more rational, long-term decision is to simply cut the psychological and emotional loss. Just as sunk costs may drive investor decisions, they may also drive an advisor’s decisions. An advisor who says “Even though I’d love to kick this client to the curb, I can’t…I’ve got years invested with him” is saying “I can’t” because of sunk costs.

How to Deal with Loss Aversion

Loss aversion is very common among financial advisors and individual investors alike, and increases the probability of making decisions that negatively impact portfolio performance. Reflect on your own behavior. If you conclude you are excessively loss averse, consider implementing the steps we recommend to deal with your behavioral bias. Of course, we will sometimes win and sometimes lose.  But there are strategies for mitigating the consequences of loss aversion.

Menkhoff, Lukas and Marina Nikiforow, “Professionals’ Endorsement of Behavioral Finance: Does it Impact Their Perception of Markets and Themselves?”, Journal of Economic Behavior and Organization, August 2009, pp. 318-329.

Schwab and Cerulli, “Mitigating the Impact of Advisors’ Behavioral Biases,” 2019. Available at https://investmentsandwealth.org/getmedia/dea8bde8-2399-4534-b97f-541dd7e46123/Cerulli-whitepaper-Mitigating-the-Impact-of-Advisors-Behavioral-Biases-002.pdf

Shefrin, Hersh and Meir Statman, “The Disposition to Sell Winners Too Early and Ride Losers Too Long: Theory and Evidence,” Journal of Finance, July 1985, pp. 777-790.

David Dubofsky and Lyle Sussman are co-authors of Your Total Wealth: The Heart and Soul of Financial Literacy (HSF Publishing, 2021). See: www.YourTotalWealth.com

Your Total Wealth is the ideal read. It is the most unique and accessible financial advice resource I’ve ever seen and goes well beyond how to make money - Kiplinger
Learn more
This is default text for notification bar
Learn more